Thousands participated in prayer, reciting Tehillim, at the gravesite of Rav Yaakov Yosef Joseph, in Union Field Cemetery in Ridgewood, Queens on Thursday, 24 Tammuz, (July 16) in commemoration of the Chief Rabbi’s 107th yarzeit.
Hundreds of candles were lit, intensifying the day’s heat. Thousands of tearful prayers of supplicants were heard all day long, beseeching Hashem to answer all tefillos and ease their oppressive burdens. Many thanks to the continuing efforts of Rabbi Yonah Landau (pictured), Chairman of the Committee to Visit Jewish Holy Sites in America for arranging the extended hours, cold drinks, and light refreshment. “It’s amazing to see the thousands of people coming to daven. I have been coming for over twenty years now.” , said Rabbi Baruch Feeder of Brooklyn. “There were many years [back then] that I was the only one to show.” This is the New York version of Lizensk said another. 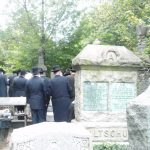 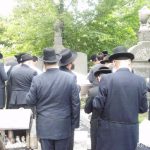 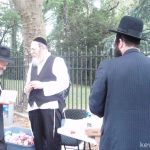 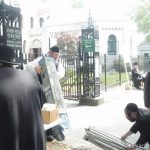 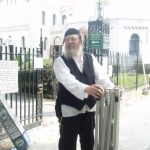 In 1888, Chief Rabbi Joseph came to New York after serving as Shtut Maggid (Town Preacher) of Vilna for almost 15 years. While at first the Chief Rabbi met with much success in improving the standards of Yiddishkeit in America it was not to last. In the end he passed away a broken man after a prolonged illness that left him speechless and bedridden for the last 4 years of his life.

A story is told that in the last year of his life, Rav Joseph regained his speech and with assistance was able to walk. Wanting to express his thanks to Hashem he asked that he be allowed to deliver the upcoming Shabbos Shuva Drasha. The upcoming drasha was widely publicized throughout the city. Shabbos morning in front of an overflowing audience Rav Joseph slowly with assistance ascended the bima (lectern) and began with the words, “Shteit in Rambam”, he then fell silent and moments later burst into uncontrollable tears. After a few moments he said, “Du vaist vus es maint tzu fargessin a Rambam far dem illui fun Volozhin” (Do you understand what it means for the Illui from Volozhin to forget a Rambam) and with that he sat down. The drasha had a tremendous impact on the community. They saw that nothing could break the Chief Rabbi’s spirit, that is, nothing except the inability to recall a Rambam. A few months later on the 24th of Tammuz he passed away.

About 100,000 people attended Rav Joseph’s funeral, one of the largest to date in New York City. The leading Torah authorities in the United States eulogized him. Each one, stepped forward to defend the late Chief Rabbi’s honor, chastising the people of the city for the way he was mistreated. The Chief Rabbi of Pittsburgh, Pennsylvania, Rav Moshe Shimon Sivits, cried out, “that Rav Joseph was only honored twice by the people of New York City – once when he arrived and now that he was gone”.

In the weeks following his funeral, countless stories of the Chief Rabbi’s greatness started to surface. “He never knew what money was”, said one of Rav Joseph’s peers. “He could have left millions of dollars but he died in absolute poverty because he stuck to his values.” Another, “Millions passed through his hand, NEVER a dollar did he hold for himself.” “He devoted his life and every dollar he earned to his fellow beings. No man was ever a broader philanthropist than Rav Joseph” said one of the members of his Beth Din and illustrated his point with the following story. Once two brothers came before the Chief Rabbi to decide a large monetary case that had already started secular legal proceedings. The brothers were so impressed in the way Rav Joseph settled the case they each insisted on giving the Chief Rabbi $200. When Rav Joseph refused the money saying, “I don’t want your money, I only want to help” the money was given to a member of the Beth Din who said he would convince the Chief Rabbi to take the money. Rav Joseph took the money, turned to another member of his Beth Din and said, “Here take the money and divide it between the first eight needy people who apply for assistance.”

The late Satmar Rebbe, Rebbe Yoel Teitelbaum intensely studied the life and times of New York’s Chief Rabbi and would encourage his followers to daven at his kever.
May all the tefillos be answered, Amen.